Okay on the Mac, I have everything working now except video on QGC 4.1.1. This is connected to it via the network cable, but with the Fathom PDB NOT plugged in. Okay that's odd... I plug the PDB in and reboot and now no conflicts. Whatever, maybe I revisit that later. Wait, and now conflicts again. WTH?

On the PC (Toughbook) I can't get any of the versions I have tried to connect through the network (tether) cable. I suspect that could be a firewall issue but I did allow QGC. The Mac asks me each time if I want to allow incoming network connections.

This is such a pain. Starting to loose motivation for the project. I really want to get SOMETHING connected and showing video.

QGC does exist for android platforms, but I don't have a solid link established to tackle the next issue, the wireless topside AP.
B

Alright, I ordered a Chasing Dory ROV to get something in the water for now. It uses an IOS or Android app based control platform. Not giving up on this, but I have vacation coming up next week and plans for some underwater adventures.

Let's get back to utilizing the ST16 though. I got QGroundControl installed on it and working. By working, I mean I can open the program and it doesn't crash, LOL! I did not manage to get it connected to anything yet.

But, it isn't seeing any of the ST16 controls or buttons. Although I’m not sure how it would on Android without an app...???

In my abuse/exploration of it last night I saw something interesting on one reboot. It popped up with a dongle/usb device and asked me what app I wanted that to open with. The two app choices were QGroundControl and the Yuneec system app. Of course I told it always QGC. And that didn’t seem to make any difference.

The Chasing Dory app requires android 5.0 or newer it seems. I got it sideloaded, but not working. I didn’t find an older compatible version. But the Dory came out in 2019, so I probably won’t.

Again, QGC DOES work though. Not sure how well yet, or how to get the controls working. So the next step there is going to be opening it up finally and taking a good look inside at the hardware. I suspect it will become a shell for a Raspberry Pi case mod. Everything else is going to require a lot on the coding and software side of things. Out of my skill set to do. But even an intense hardware hack like this, pretty easy for me.

For now I am going to just hold out some hope that you guys know an easy software hack for Android to see the sticks and buttons...

Turning QGC into the the primary app, and possibly stripping the Yuneec one down to port controls into QGC might be doable by someone, just not me lol!!! Still no point to try until we know QGC will run solidly on the 4.4.4 Android

I side loaded a small app to read GPS data on the ST16 and it installed and would run, but did not interface with the GPS unit.

Another person used adb via USB connection from the PC and used: ‘adb install xxxxxxx.apk’ at the adb command line to install the same program and it was reportedly working. This may take the same type of thing to get the low level stuff working with QGC. The sticks may then interface and work with QGC. It is worth trying
Toggle signature
If you know it, share it.
If you don’t know it, learn it.
The seeds of knowledge,
Feed the future.
Be a part of “it“.
B

That actually sounds like something I could figure out how to do! I will give that a shot.

I am at the point that it is time to open up the ST16 and explore. Need to see if I can get any idea of the layout and internal connections.

I finally have a clue where to investigate the lack of video issue... The Fathom uses the Pi board connected camera. The ArduSub uses a USB connected camera. They are both h.264 cameras with UDP protocols. So in theory, either camera type should work. I think I just have a routing issue.

Waiting for the Chasing Dory ROV and an Ipega controller to arrive sometime today. I have managed to get the Chasing software and gamepad interface installed on both my iPads and the Onn tablet. Looking forward to opening that ROV up and exploring inside it too!

Well I have workbenches to go clean up before the goodies arrive!
B

My video issue is an "I have no clue what I am doing" networking issue. Apparently nothing is automatically setup, and I have to create the initial routing configuration on the Raspberry Pi AKA the Companion Computer. Then I need to get the right settings into the QGroundControl software, and probably also into the laptop network configuration.

So I have two setup types to choose from. I need the idiot proof/simpler choice... I can setup the ROV as the UDP server, or the Topside Computer as the UDP server. I think I want the first choice, but I am not sure. Networking isn't my thing. It took me reading through this page about 6 times to realize there were choices.

My goal is to have this be as seamless as possible for future connections... And what would be easier to connect an Android to, like this ST16 platform?
S

You can use a android app called octopus to map out your joysticks and controls on your android.watch this video and it will tell you how to do it.I have a dory and would like to find a way to use a wifi controller to control it without using the android tablet with a blue tooth game pad controller.https://youtu.be/simJm4CCGKw
S

Biggs,i see you are over on the west coast of florida.I am 10 miles north of orlando.This site should help you with your fathom,its the project updates for the fathom.it starts at the end of the project and goes to the beginning when they got all the kickstarter money. 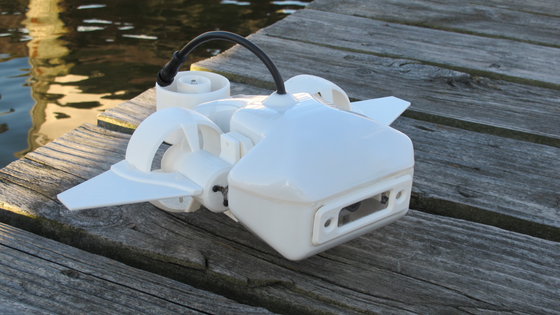 See the world in a new way with a full HD underwater drone that's easy to use, modular, portable, and exceptionally affordable.

DoomMeister said:
Another person used adb via USB connection from the PC
Click to expand...

Vaklin said:
Ask for a photo, please.
Click to expand...

I think that was the GPS app you asked me to try months ago.
Toggle signature
If you know it, share it.
If you don’t know it, learn it.
The seeds of knowledge,
Feed the future.
Be a part of “it“.

DoomMeister said:
I think that was the GPS app you asked me to try months ago.
Click to expand...

Yes, but let us see how it works via the adb.
Toggle signature
73 de LZ2VL

Q
How to record audio with the Steadygrip