Hello,
I'm new to the group. I'm in Colorado, near Colorado Springs. I've been flying drones for almost 5 years, but they've all been DJI. I do some commercial work, inspections, 3D mapping, real estate, etc.

But I've decided to go with the H520E to fly this camera, which arrives on Tuesday, so I haven't even gotten my hands on it yet. But I'm wanting to mount the Flir Vue Pro on it, which I do already have.

I see there are mounts for the H520 and other models, but I haven't seen anything for the H520E. I also have the Tarot gimbal that is commonly used with the Flir Vue Pro.

I'm wondering if anyone has mounted this on this drone. I don't need it to be "integrated" into the drone system (but if someone has done that, that would be great), as I can use a separate controller for the camera and the gimbal. I do already have that set up and working separately on the bench. Just mostly need to get that set up attached.

I've seen the pics for the H520 mount, and I'm pretty sure I can design and 3D print that, once I can take measurements of the drone. But just wondering if someone has already done something similar or found something.

Welcome to the Forum, you will find some very smart people here that can help you with any issue you might have 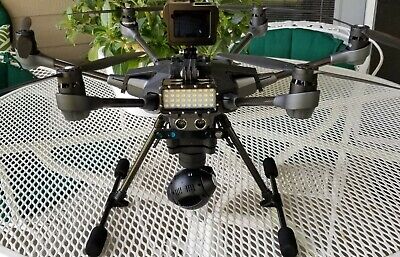 Mount also accepts EVO SS gimbal as pictured if you need maximum stability. This is for top mounting on a Yuneec Typhoon H Series. Adaptor for Parrot Sequoia and Flir VUE in included. Manufactured out of high grade PLA.
www.ebay.com 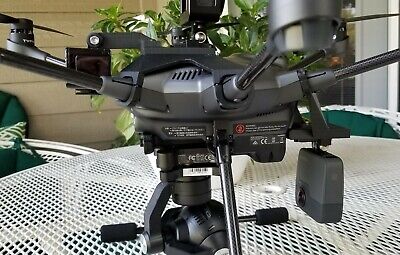 Configuring the FLIR into the Yuneec controller is not simple on DJI must people use a second controller with various control components. The FLIR has a GoPro style adaptor and a HDMI IO board which you will need. The rest will depend on how technically adapt you are. You can easily mount the FLIR to a EVO SS or Tarot TL03 gimbal however, controlling it is another issue.

Hope this helps let me know if you have questions
A

Thanks for the reply. I think what I'll end up doing is using a second controller as far as the gimbal and camera goes. I already have it set up on the bench.

For the mount, I'm also thinking I'll be able to make one. If it's at all like the one for the H520, I'm pretty sure I can. I've made some things for my other drones and other things. The drone is coming tonight, so I'll know for sure shortly.

Technically, I do pretty well; I make things with the Arduino and Rasp Pi, I'm a programmer, ham radio guy...

I'll send some pics when I get it done.

Ok good let me know if I can help.
Reactions: DoomMeister and andyalex
A

Got the drone in hand. Just a couple of comments. First, the mounting is going to be way easier than I thought. It has a gimbal mount already on it, which I did not see on their site or anywhere. Just going to run some carbon fiber tubes thru it, well attached, and my gimbal will go right on them. That does mean I'll have two of the vibration brackets (maybe that's not the official name), so maybe later I'll look at removing the existing mount and just using the one vibration bracket

I pretty much have everything together and working for this project. I 3D printed a box (in a few different parts) with compartments for a few components and wires.

The box is dropped down just a bit with spacing under the drone, as there seems to be some sort of vent right there and I didn't want to block it. Overall, it seems about as compact as I can make. I'll tidy up a few more wires. I've flown it and did a little video of "inspecting" some buildings on our property. I can post a link to that in a bit. But here are some pics.

Looks good. So you only have one camera? No piloting camera correct? We have mounts for the dji air fpv on top of 520
A

IronSky1 said:
Looks good. So you only have one camera? No piloting camera correct? We have mounts for the dji air fpv on top of 520
Click to expand...

That is correct, no piloting camera. I'd be interested in seeing that. I might be a little concerned about the weight as I might be close to maxing this out. But maybe not.

Andy Weight is not much of an issue on these cameras (100g with camera and mounting) they can be mounted under or on top of any of my top or bottom mounts for DJI I1 or I2 , Disco or H480/520 or make your own.

That does look nice. What is the cost for that setup?
I do have a tiny fpv camera and another transmitter that I could make a mount for, but it wouldn't be as nice looking as this.

I know everyone has seen some thermal videos, but here's what I took recently with this thermal setup.

It's just this little cheap one.

Looking into the Air FPV unit, I wasn't that familiar with exactly what it consisted of. It's certainly a compact unit and looks nice, but I may for now use this cheap one with the transmitter I have and make a mount. That will cost me pretty much nothing.

Get me a accurate measurment I will see if it fits. Size accross attachment points and height looks square
A

Thanks for checking on that.
The camera itself is 25x25mm.
The bracket is 28mm wide and 27mm tall.

Thanks for all that. I'll take a look at them.
That's not too much, though.
A

A question about mounting to the top of the H520(E). What is the mount being attached to? I don't see any good place for that. Do you have to drill holes or something similar? Which I'd rather not do.