WTH happened with my H?

Was sitting and thinking of a good topic but that's what keeps going through my mind all the time! First a quick recap, I've had the H on pre-order for about 2 months but the supplier in sweden was having problems getting them in. Finally last friday they got it and I drove over there and picked it up!

Got home and took it up for a quick test flight and everything seemed to be working as it should, took it down when it gave me the batter warning so I charged it over night since there was a event on Saturday that I was supposed to shoot with it. Got up in the morning and was going to shoot some at the lake, noticed the drone had some problems getting GPS lock but it finally did and I took off. a few seconds after takeoff it suddenly went full speed away from me straight into a hill, grass flying and me cursing like crazy. Gimbal broke off but nothing serious and one of the props.

Here is the video from the controller:
As you can see I was in angle mode so it's not the "circle of death" from smart mode. It was also set at the slowest turtle speed so I can't really grasp what the heck happened! You can see the telemetry over here to Telemetry_00011.csv or the raw csv files here

So... terrified about the fact that I nearly lost my new drone to a watery grave I let it sit until it was time for the competition that I was supposed to shoot. I felt that I needed to try it out in private once more so I went home and started it. First I noticed that even tough I had 20 satellites connected to the drone it said it was still aquiring. Shut of the drone and when I started it the the next time it got the lock almost straight away.
So, took some low flights since I wanted to be able to get it down as fast as possible if something went FUBAR, then tried a bit higher and everything seemed to be working perfectly. Went up to about 20m started to rotate around when it suddenly started rotating around in what felt like all angles at once and went straight down into the ground... 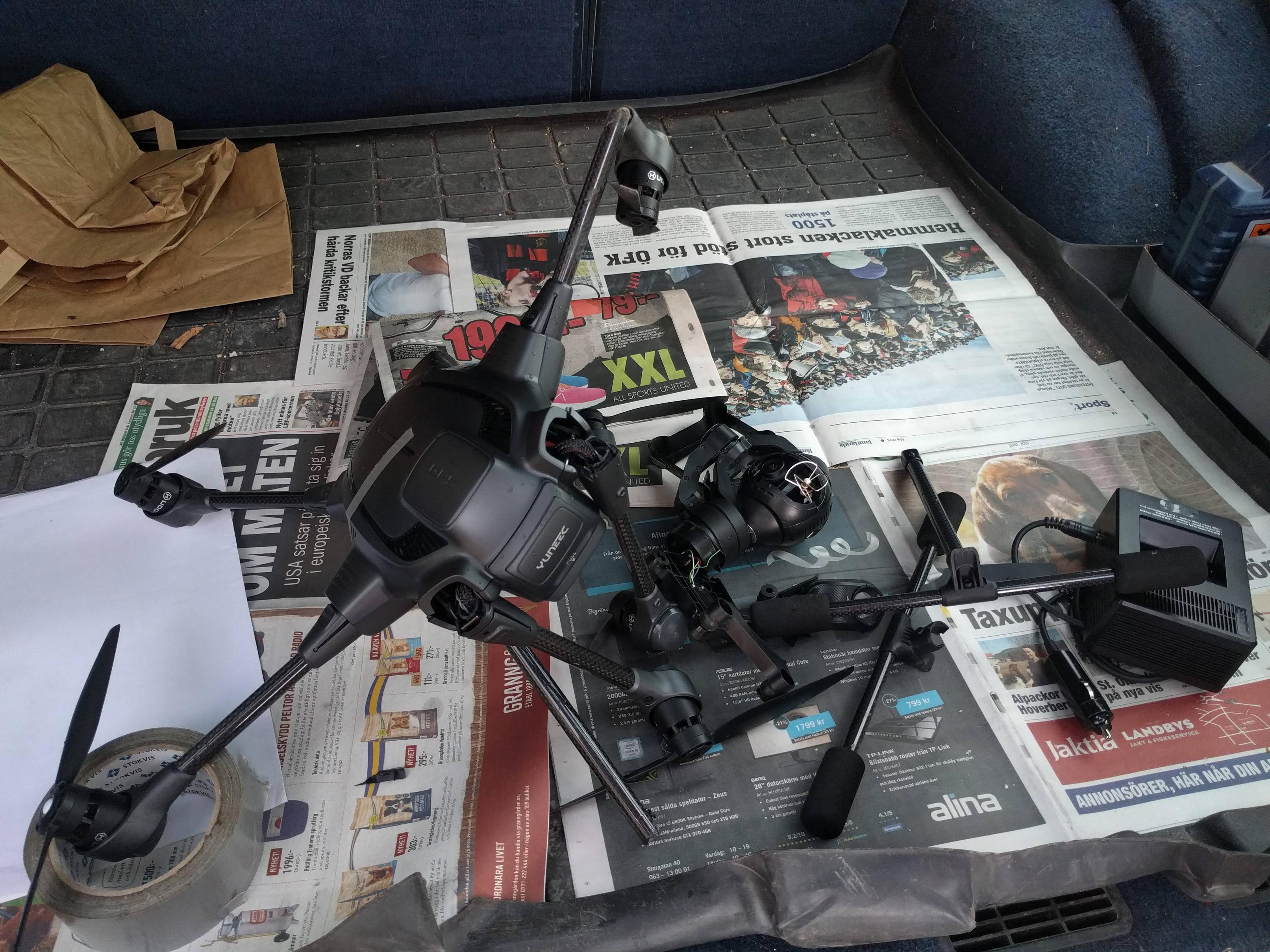 So, gimbal in pieces, 3 arms broken almost all the props and both legs. Cracks at the sonar and some other places to in the plastic!

So, video from the controller looks like this for the time of the accident:
Telemetry is here: Telemetry_00016.csv
And the raw csv files can be found here
And as a bonus here's the last piece of the video I recorded, you can jump forward to the end and you'll see when the legs spin into the shot.

So, anyone have some ideas, I'll contact the reseller tomorrow and hopefully it'll be a RTM and I just get a new one since I can't see how this can be something else then a fabrication fault or am I missing something?
Last edited: Jul 31, 2016
R

****, that's sad. Sounds like intermittent electronic control problems, definitely should be due a new replacement.
Out of curiosity, was it windy before the first crash?
I hope you have better luck in the future.

You don't make any mention of doing either a Compass Calibration or IMU Calibration before flight. You also don't mention checking/updating the firmware. These "could" be contributing factors.

It also could be you have a bad bird. But doing the calibrations could have eliminated some possibilities. My first "H" had issues that couldn't be solved with all the calibrations I did...

I think my camera is not transmitting.

G
Any way of bringing obstacle detection into the drone?